Yesterday, I tried to install our new DD-WRT54GL, as the current one is acting a bit flaky. So I thought I'd try OpenWRT first, but for some reason it would not find the wireless card. OK, back to DD-WRT then, which worked out fine until I plugged in the network cable to the DSL modem — for some reason it won't do PPPoE at all. The debugging PPPoE problems page from the Wiki was pretty useless too, as I do not have the (rp-)pppoe command line utility and pppd nodetach debug debug did not talk to me either.

I should have known better not to touch anything today, but I wanted to play with Nexenta (OpenSolaris + GNU tools + APT) a bit. So I tried to create a new VirtualBox virtual machine on our server, but VirtualBox just hung up on me after clicking 'Finish'. I shutdown the other VMs and killed VirtualBox. Upon restart, one of the machines did not come up again because its hard drive file was locked. Having found nothing on how to resolve that, I decided to reboot the server and see if the lock would go away. Apparently it did, but now loading the tun module fails for some reason and if I load it using modprobe -f, I get (host) kernel panics upon starting the VMs. 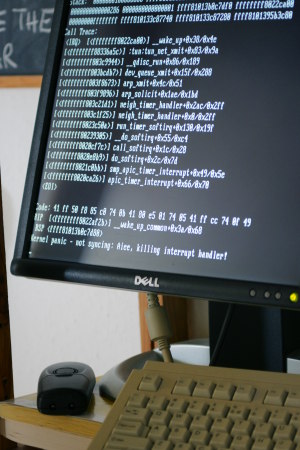